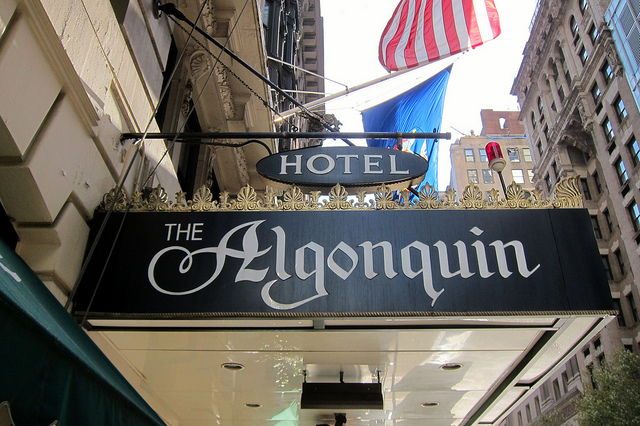 In the second of a series about legendary meeting tables, we’re looking at the Algonquin Round Table, which brought together some America’s wittiest and most perceptive minds of early 20th century. Collaboration happens at tables. This group’s table meetings amplified the creative output of all members. Their insights and collaborative genius spread to other ventures in writing, art, movies, plays, and politics—American culture—even after the regular gatherings ended.

Started as a joke

For 10 years in the 1920s, a group of journalists, playwrights, editors, critics, humorists, actors, producers, and publicists met in the Rose Room at The Algonquin Hotel in New York. The “Gonk” hotel, near their offices and theatres was an easy spot for members to meet, as they realized after an enjoyable welcome home party organized there for Alexander Woollcott.

The party was a practical joke. It was really to cajole Woollcott, back from Europe where he’d been part of the editorial board of an army newspaper during WWI and now working as a theatre critic, into being more supportive of playwright Eugene O’Neill. The ploy seems to have worked, as Woollcott is now seen as one of O’Neill’s “ardent early supporters.” After the party, everyone who attended recognized that getting together could be productive. It certainly seemed to satisfy a need to have fun, to bounce ideas off one another, and even to create a pool of sympathetic talent for various productions.

Bringing collaborative greatness to the table

The Algonquin Round Table members had many hallmarks of great collaborators:

We’ll look at these in more detail, and note that the last one is key for us in understanding the collaborative acheievement of the Round Table. In working together, they eventually had a much wider influence on culture than they had envisioned after the party for Woollcott.

Humour drives collaboration at the Round Table

From its festive beginning, wit and enjoyment remained strong foundations for the group, which included Franklin Pierce Adams, Robert Benchley, Dorothy Parker, Ruth Hale, Heywood Broun, Marc Connelly, George S. Kaufman,  Brock Pemberton, Harold Ross, Robert E. Sherwood, John Peter Toohey, and Alexander Woollcott. Looking at the creative output of each, we see they often worked with one another or with other collaborators; the collaborative impulse continues through all their lives and careers.

A shared delight in wit marked all activities of the Round Table. Meeting first at a long table served by a waiter who was named Luigi. They called themselves the “Luigi board,” punning on a popular novelty of the period. When they were moved to a round table by the hotel (possibly so their wit could be better shared with other patrons), Dorothy Parker coined the name “The Vicious Circle” aptly indicating the new arrangement and their style of wit. They became known as “The Round Table” after a popular caricature by Ernest Duffy showed the members in Arthurian-style armour.

They worked together, associated with one another, played games … and the practical jokes continued. While such activities might have been less enjoyable for some members, they did serve on the whole to create camaraderie. Dorothy Parker’s wit shone through many of the word games — Woollcott called Parker “a combination of Little Nell and Lady Macbeth.” Many of Dorothy Parker’s witticisms, often spontaneously delivered at the Round Table, have remained fresh to this day:

— Dorothy Parker, from the introduction to The Most of S. J. Perelman

Mutual respect holds the Round Table together

Everyone in the group held the others in high esteem. They mattered to one another. They worked to bring recognition to one another’s work and to the work of American artists, a principle that was there from the beginning in the party to encourage a more sympathetic view of Eugene O’Neill’s work. Although, it must be mentioned, one thing that likely fostered camaraderie at the gatherings was the free hors d’oeuvres supplied by the hotel.

Robert Benchley worked with Robert Sherwood and Dorothy Parker at Vanity Fair magazine. Sherwood had admired Benchley since they met at Harvard, where Benchley was a student in the class of 1912. With both men at over six feet tall, Dorothy Parker, who was five feet four inches, remarked that when they walked down the street together, they looked like “a walking pipe organ.”

In comments like that, we see a characteristic tempering of the admiration they have for one another with humour. Later, both men resigned from the magazine after Parker was fired, no questions asked, for some comments in a review about the performance of an actress who was the wife of a producer, who also happened to be an advertiser in the magazine.

Their resignation indicates their shared sense of the importance of journalistic independence in the group. Benchley and Parker supported one another afterwards, as shown when they first started renting a small office together, though Benchley soon accepted employment at Life magazine.

This is one many examples of mutual support in the life stories of all the Round Table members. The depth of understanding of the importance as much as the cost of supporting others was integrated in all their lives and extended well beyond the life of the group itself to other collaborations in film and production with non-Algonquin members. A unique contribution they made is the collaboration among men and women as equals.

The wit and activities of the Round Table were discussed in columns by members and thus reached readers nationwide, creating career reputations for many of them.  After the Round Table gatherings ended, collaboration continued in some form for most of the members, though often with new partners: in 1924, Dorothy Parker collaborated with Elmer Rice on the play Close Harmony, and throughout the 30’s after the Round Table had stopped gathering, she worked with Alan Campbell on many movie scripts, including A Star is Born (1937).

Some members went on to win Pulitzer Prizes for literature. These include Connelly (one prize for drama), Sherwood (three prizes for drama and one for biography), and George Kaufman (who shared his two prizes for drama with several collaborators).

Other collaborators soon joined, such as Rea Irvin who designed The New Yorker‘s iconic typeface and drew the classic “Eustace Tilley” character that appeared annually on a February issue cover. The magazine has continued expanding the staff of writers and contributors as well as its audience. Now with worldwide appeal, it sets high publishing standards as one of the greatest weeklies.

Although Parker and others may have disparaged the group in later life, it is difficult to take such comments seriously in light of the spread of their influence. It is perhaps more on a personal level that the sense of achievement was missed, especially in a society that tends to promote and recognize individual success.

As seen with The New Yorker, a foundation of good collaboration can sometimes create a stronghold for greatness. The Algonquin Hotel and the Round Table which made it famous have become iconic presences in American culture. Over the decade that the group was active, there were multiple collaborations, between the hotel and the group, the cultural scene of New York and members, members with one another, as well as publishers around the country and members. Successes, great and small, spread among all who participated; individual contributions were not always hits but another wonderful project was always around the corner.

This blog was written under the effects of chemo brain. If you have suggestions, please leave them for me below. Thanks!