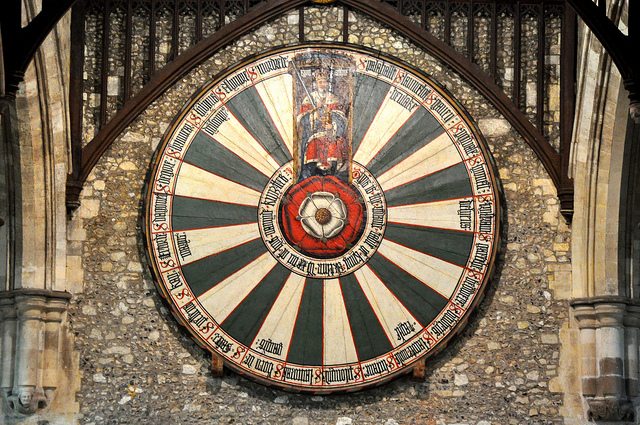 Collaboration happens at tables, usually in meeting rooms. Legendary meeting tables continue to inspire our work together. In this series, let’s look at one that comes to us through the mists of time: the Round Table of King Arthur and his Knights.

According to legend, King Arthur drew the sword Excalibur from the stone—a feat that made him ruler of Britain. To defend the lands against Saxon and Roman invaders, he brought together the bravest knights of the land at the Round Table.

A round table brings people together equally

We may never know whether there was an actual Arthur or Round Table. The medieval table pictured on this page is on display at the ruins of Winchester Castle. It is from a later period than Arthur is said to have lived, that is, during the Dark Ages, around the sixth century. Still, the epic resonates throughout our literature and culture, handed down, and inspiring writers such as Alfred Tennyson, Mark Twain, John Steinbeck, and Scottish-Canadian writer Jack Whyte to explore this powerful story.

In some versions, such as Sir Thomas Malory’s, the Round Table and a hundred knights formed the dowry given to Arthur when he married Guinevere. King Arthur invites these brave knights and others to sit at the round table and govern the land. If they were ever tempted to be competitive, while at the table, at least, they were equal in stature. That is the beauty of the Round Table. It is a creates at atmosphere of equality and collaboration.

While Geoffrey of Monmouth does not mention a table, he says, in his History of the Kings of Britain, that Arthur “increased his personal entourage by inviting very distinguished men from far-distant kingdoms to join it.” (Translated by Lewis Thorpe). Here, the entourage is a virtual table. Governing is the ultimate collaborative venture.

Arthur always shows great personal strength. However, later in the saga, while building the empire,  Arthur is betrayed by a knight (Lancelot), or, depending which version you read, a nephew (Mordred), who courts/steals his wife, Queen Guinevere. Arthur defeats his final enemies in battle, though he is mortally wounded.

The round table had one vacant seat, called the “Siege Perilous” (perilous seat). This seat was reserved by the magician Merlin for the knight who would one day be successful in the quest for the Holy Grail, yet was fatal to anyone else who would sit in it.

As the Arthur legend shows, little can be accomplished if people don’t combine their efforts effectively. What are Arthur, his knights and the British people looking for?  A safe land to live in, a specific goal or dream, independence from oppression and invaders? It can all be undercut by intrigue, ambition, or betrayal at any time. Yet while we are at the table, we can see one another. There is a chance that we will recognize the seeds of failure.

The Round Table is a timeless symbol of the power of meetings to discuss, resolve issues, and make decisions collectively. The table is both a tool and symbol of governance. When we invite people to the table, we can create alliances and add a foundation of strength to our collective authority.

At the table are those we trust. By creating an atmosphere of equality, people can offer the best of themselves to the matter at hand. From this leaders see that collaboration and leadership go hand in hand. Leaders must collaborate and gain cooperation of those at the table. A table meeting does not prevent betrayal.

There could be a hot seat at any collaborative table. Like the Siege Perilous, you’d want to sit in it if you are ready to respond to a challenge.

Photo credit: Tim Milkins, The Round Table, taken at Winchester Castle in Feb. 2013, accessed through Flickr by CC.

Tags:
collabor Collaboration decision hot seat meeting table trust
← PreviousCollaboration and what we can learn from slime mould
Next →Great Collaboration Tables 2 – The Algonquin Round Table